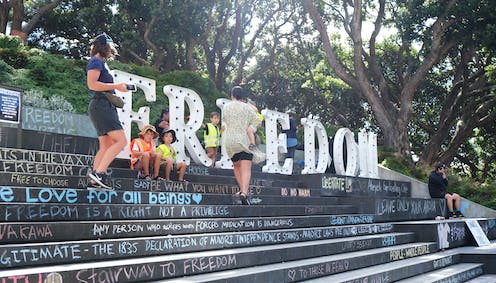 Most people welcomed the opportunity to get vaccinated against COVID-19, yet a non-trivial minority did not. Vaccine-resistant people tend to hold strong views and assertively reject conventional medical or public health recommendations. This is puzzling to many, and the issue has become a flashpoint in several countries.

It has resulted in strained relationships, even within families, and at a macro-level has threatened social cohesion, such as during the month-long protest on parliament grounds in Wellington, New Zealand.

This raises the question: where do these strong, often visceral anti-vaccination sentiments spring from? As lifecourse researchers we know that many adult attitudes, traits and behaviours have their roots in childhood. This insight prompted us to enquire about vaccine resistance among members of the long-running Dunedin Study, which marks 50 years this month.

Specifically, we surveyed study members about their vaccination intentions between April and July 2021, just prior to the national vaccine roll out which began in New Zealand in August 2021. Our findings support the idea that anti-vaccination views stem from childhood experiences.

The Dunedin Study, which has followed a 1972-73 birth cohort, has amassed a wealth of information on many aspects of the lives of its 1037 participants, including their physical health and personal experiences as well as long-standing values, motives, lifestyles, information-processing capacities and emotional tendencies, going right back to childhood. 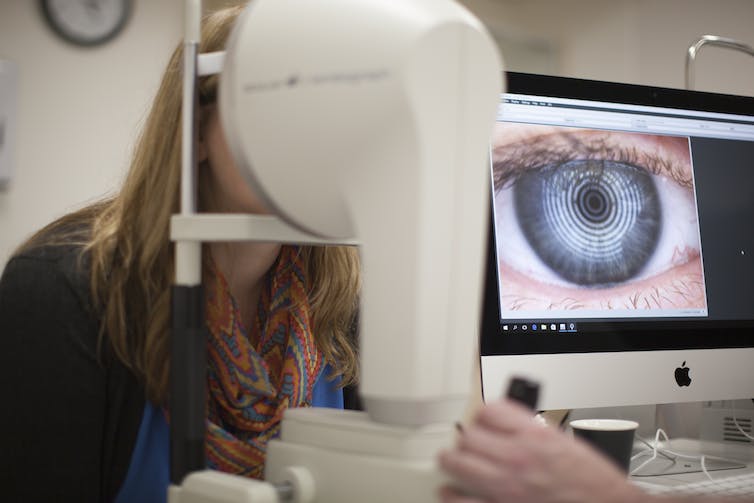 Among many assessments, study participants undergo eye examinations to test the health of optic nerves and the eye’s surface. Guy Frederick, CC BY-ND

Almost 90% of the Dunedin Study members responded to our 2021 survey about vaccination intent. We found 13% of our cohort did not plan to be vaccinated (with similar numbers of men and women).

When we compared the early life histories of those who were vaccine resistant to those who were not we found many vaccine-resistant adults had histories of adverse experiences during childhood, including abuse, maltreatment, deprivation or neglect, or having an alcoholic parent.

These experiences would have made their childhood unpredictable and contributed to a lifelong legacy of mistrust in authorities, as well as seeding the belief that “when the proverbial hits the fan you’re on your own”. Our findings are summarised in this figure. 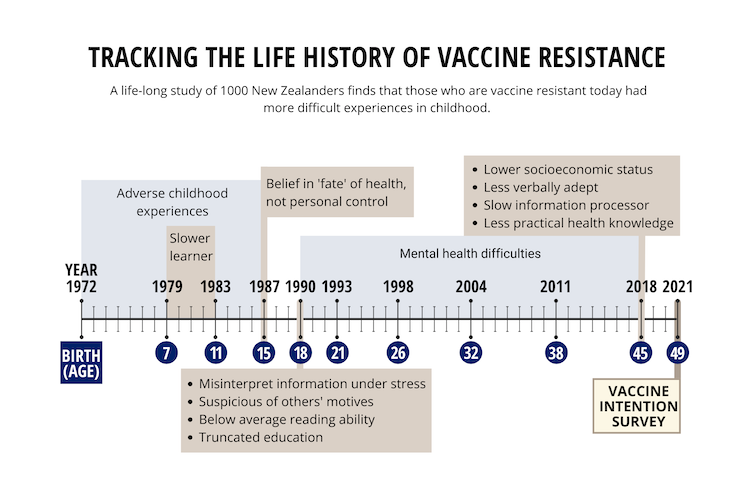 Personality tests at age 18 showed people in the vaccine-resistant group were vulnerable to frequent extreme emotions of fear and anger. They tended to shut down mentally when under stress.

They also felt fatalistic about health matters, reporting at age 15 on a scale called “health locus of control” that there is nothing people can do to improve their health. As teens they often misinterpreted situations by unnecessarily jumping to the conclusion they were being threatened.

The resistant group also described themselves as non-conformists who valued personal freedom and self-reliance over following social norms. As they grew older, many experienced mental health problems characterised by apathy, faulty decision-making and susceptibility to conspiracy theories.

To compound matters further, some vaccine-resistant study members had cognitive difficulties since childhood, along with their early-life adversities and emotional vulnerabilities. They had been poor readers in high school and scored low on the study’s tests of verbal comprehension and processing speed. These tests measure the amount of effort and time a person requires to decode incoming information.

Such longstanding cognitive difficulties would certainly make it difficult for anyone to comprehend complicated health information under the calmest of conditions. But when comprehension difficulties combine with the extreme negative emotions more common among vaccine-resistant people, this can lead to vaccination decisions that seem inexplicable to health professionals.

Today, New Zealand has achieved a very high vaccination rate (95% of those eligible above the age of 12), which is approximately 10% higher than in England, Wales, Scotland or Ireland and 20% higher than in the US.

More starkly, the New Zealand death rate per million population is currently 71. This compares favourably to other democracies such as the US with 2,949 deaths per million (40 times New Zealand’s rate), UK at 2,423 per million (34 times) and Canada at 991 per million (14 times).

How to overcome vaccine resistance

How then do we reconcile our finding that 13% of our cohort were vaccine resistant and the national vaccination rate now sits at 95%? There are a number of factors that helped drive the rate this high.

leveraging initial fear about the arrival of new variants, Delta and Omicron

widespread implementation of vaccine mandates and border closure, both of which have become increasingly controversial

the devolution by government of vaccination responsibilities to community groups, particularly those at highest risk such as Māori, Pasifika and those with mental health challenges.

A distinct advantage of the community-driven approach is that it harnesses more intimate knowledge about people and their needs, thereby creating high(er) trust for decision-making about vaccination. 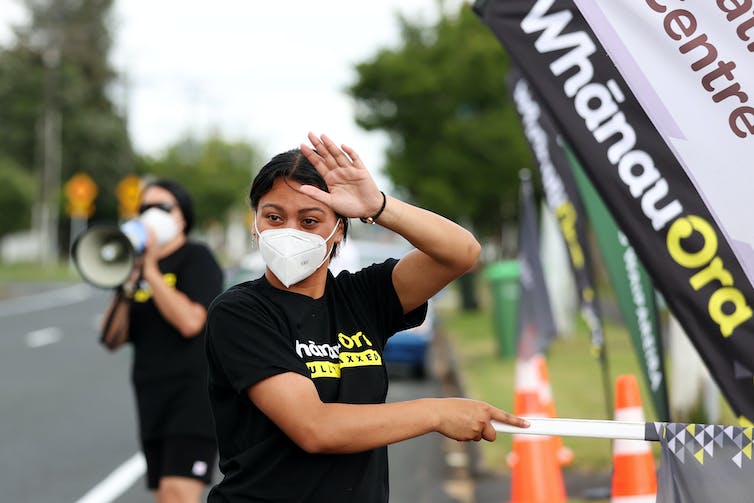 This is consistent with our findings which highlight the importance of understanding individual life histories and different ways of thinking about the world – which are both attributable to adversities experienced by some people early in life. This has the added benefit of encouraging a more compassionate view towards vaccine resistance, which might ultimately translate into higher rates of vaccine preparedness.

Read more: The 9 psychological barriers that lead to COVID-19 vaccine hesitancy and refusal

For many, the move from a one-size-fits-all approach occurred too slowly and this is an important lesson for the future. Another lesson is that achieving high vaccination rates has not been free of “cost” to individuals, families and communities. It has been a struggle to persuade many citizens to get vaccinated and it would be unrealistic not to expect some residual resentment or anger among those most heavily affected by these decisions.

Preparing for the next pandemic

COVID-19 is unlikely to be the last pandemic. Recommendations about how governments should prepare for future pandemics often involve medical technology solutions such as improvements in testing, vaccine delivery and treatments, as well as better-prepared hospitals.

Other recommendations emphasise economic solutions such as a world pandemic fund, more resilient supply chains and global coordination of vaccine distribution. The contribution of our research is the appreciation that citizens’ vaccine resistance is a lifelong psychological style of misinterpreting information during crisis situations that is laid down before high school age.

We recommend that national preparation for future pandemics should include preventive education to teach school children about virus epidemiology, mechanisms of infection, infection-mitigating behaviours and vaccines. Early education can prepare the public to appreciate the need for hand-washing, mask-wearing, social distancing and vaccination.

Read more: 5 strategies to prepare now for the next pandemic

Early education about viruses and vaccines could provide citizens with a pre-existing knowledge framework, reduce citizens’ level of uncertainty in a future pandemic, prevent emotional stress reactions and enhance openness to health messaging. Technology and money are two key tools in a pandemic-preparedness strategy, but the third vital tool should be a prepared citizenry.

The takeaway messages are twofold. First, do not scorn or belittle vaccine-resistant people, but rather attempt to glean a deeper understanding on “where they’re coming from” and try to address their concerns without judgement. This is best achieved by empowering the local communities that vaccine resisters are most likely to trust.

The second key insight points to a longer-term strategy that involves education about pandemics and the value of vaccinations in protecting the community. This needs to begin when children are young, and of course it must be delivered in an age-appropriate way. This would be wise simply because, when it comes to future pandemics, it’s not a matter of if, but when.

Richie Poulton receives funding from public h good funding agencies in NZ (e.g. the Health Research Council) and subcontracts from The National Institute of Aging in the United States.

Terrie Moffitt receives funding from the US National Institute on Aging, the UK Medical Research Council, and the Covid research program of the American Psychological Association and the US Center for Disease Control and Prevention.

Avshalom Caspi does not work for, consult, own shares in or receive funding from any company or organisation that would benefit from this article, and has disclosed no relevant affiliations beyond their academic appointment.

Letter: Here’s hoping the CDC will be made privy to Stockton’s COVID research

How we remember them: My grandmother’s shirt | Coronavirus pandemic | Al Jazeera

Half of Covid-hospitalised still symptomatic two years on, study finds | Coronavirus | The Guardian

Letter: Here’s hoping the CDC will be made privy to Stockton’s COVID research

Is lockdown about to get TOUGHER? Matt Hancock refuses to rule out curfews or closing nurseries | Daily Mail Online

Are Steroids the Cure for Long COVID?